The DNR continues to restrict the area we are allowed to treat to 15% of the littoral zone. The treatment maps will show where the decision was made to treat for Eurasian milfoil (16.9 acres) and curlyleaf pondweed (8 acres).  The treatment locations were compiled from the delineation conducted by James Johnson at Freshwater Scientific Services, LLC.  The complete results can be found on the 2021 Delineation Report.

We have also been issued a permit to kill all vegetation in an area 75ft. x 75ft. around our pumps.  This permit was issued to the City of Buffalo because they are the adjacent land owners to the pump location. As of July 15, this application has not been applied.

6/28/13 - The DNR has approved the final 2013 EWM treatment. A total of 17 acres will be sprayed. The product used has restrictions in place for the area that are treated. These areas will be marked with either Orange DNR signs on the shore of with floating marker buoys in the lake.

No restrictions on Swimming or Fish Consumption

On July 1st 2010, the DNR conducted an inspection of the problematic Euransion Watermilfoil found on Lake Pulaski. Click here to review the 2010 Lake Pulaski Inspection of Delineation EWM Report.

2010 Pulaski Survey:  To enhance knowledge of the plant community in Lake Pulaski and Little Pulaski, the Lake Pulaski LID contracted with Freshwater Scientific Services,LLC to conduct a point-intercept vegetation surveys in August 2009 and June 2010. These surveys were designed to assess the growth and distribution of exotic invasive aquatic plants, as well as native aquatic plants. Click here to view the 2010 Lake Pulaski Vegetation Report. (pdf) 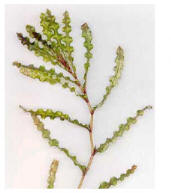 Curly-leaf pondweed (Potamogeton Crispus) is a perennial, rooted submersed vascular plant that was first noted in Minnesota about 1910 (Moyle and Hotchkiss 1945). Curly-leaf pondweed is known to occur in 740 Minnesota Lakes in 68 of the 87 counties. Unlike most native plants, curly-leaf pondweed plants remain alive through the winter slowly growing even under thick ice and snow cover (Wehrmeister and Stuckey 1978). Therefore, it is often the first plant to appear after ice-out.

By late spring, curly-leaf pondweed can form dense mats that may interfere with recreation and limit the growth of native aquatic plants (Catling and Dobson 1985). In mid-summer, curly-leaf plants usually die back, which results in rafts of dying plants piling up on shorelines, and is often followed by an increase in phosphorus (Bolduan et al 1994) and undesirable algae blooms. A key question underlying the management of curly-leaf pondweed is: to what extent do lakes experience algal blooms due to the presence of curly-leaf pondweed, and to what extent do lakes grow large amounts of curly-leaf pondweed due to the abundance of mid-summer algae and the nutrient regime that supports this condition? Curly-leaf plants usually die back in early summer in response to increasing water temperatures, but they first form vegetative propagules called turions (hardened stem tips). New plants sprout from turions in the fall (Catling and Dobson 1985). In order to obtain-long term control of curly-leaf pondweed, the production of turions must be stopped. It is not clear how many years of turion reduction it will take to produce long-term control of curly-leaf. 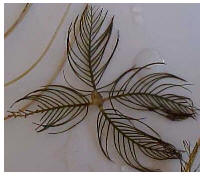 Eurasian watermilfoil (Myriophyllum spicatum) is an invasive submerged aquatic plant that was inadvertently introduced to Minnesota. Eurasian watermilfoil, hereinafter called milfoil, was first discovered on Lake Minnetonka during the fall of 1987. Milfoil can limit recreational activities on water bodies and alter aquatic ecosystems by displacing native plants. As a result, Minnesota established the Minnesota Department of Natural Resources (DNR) Invasive Species Program to manage milfoil and well as certain other invasive species. Milfoil is classified as a prohibited invasive species, which means that it may not be bought, sold, or possessed in Minnesota.MN DNR Eurasian Water Milfoil Fact Sheet in .pdf

Want to learn more about the studies, status, and programs currently in play in the effort to manage invasive species? Each year, by January 15, the MN DNR is required to prepare a report for the legislature that summarizes the status of management efforts for invasive species (aquatic plants and wild animals) under its jurisdiction. This report must include expenditures, progress in, and the effectiveness of management activities conducted in the state, including educational efforts and watercraft inspections, information on the participation of others in control efforts, and an assessment of future management needs.

Algae Blooms: Heat and Lack of Rain Can Bring Toxic Algae Blooms. As the thermometer climbs and a string of rainless days stretches on across parts of the state, some area lakes are starting to "green up." The Minnesota Pollution Control Agency (MPCA) reminds people that these conditions can produce toxic blue-green algae blooms in lakes and rivers that can harm pets, livestock and even people.

“While not all algae blooms this time of year are harmful, the best policy is, when in doubt, stay out” said Steve Heiskary of the MPCA. Most algae blooms are harmless. Blue-green algae particularly thrive in warm, shallow, nutrient-rich lakes. Not every blue-green bloom is toxic, but it can be difficult to predict which ones will cause problems. Often the algae can be concentrated when the wind blows them to a windward shore. Most problems occur when the algae concentrate around a shoreline and animals drink the water or otherwise ingest the algae or humans get in the water. Distinguishing blue-green algae from other types may be difficult for non-experts. But toxic blooms generally look pretty nasty, sometimes said to look like pea soup, spilled green paint or floating mats of scum. They often smell bad as well. For more information about toxic algae blooms, go to http://www.pca.state.mn.us/water/clmp-toxicalgae.html

Floating cattail bogs:  Who is responsible for removing a bog that floated across the lake and lodged on my shoreline? Is a DNR permit required to remove it?  When a floating bog has broken free from the shoreline by natural causes, and becomes grounded elsewhere on private or public property, the property owner(s) where the bog becomes grounded are responsible for removing the bog if they so desire. If there is no evidence to identify the responsible party or parties, the local government must assume responsibility.

The DNR responsibility is limited to the following:

* Provide advice and approval on bog disposition.
* Obtain funds from the state agency involved when a floating bog has become lodged on the shoreline of state-owned lands.
* Remove any floating bogs lodged on state owned dams or other DNR property.